That RPG thing, and what it has to do with writing

So a while back, I changed the description of the page from “tips on writing better fiction” to “writing, roleplaying and storytelling”. This might seem as though I changed the vocation of the page, but that isn’t the case at all; in fact, I’m just broadening the horizon to really include all the tools that can make you a better writer, and role-playing games are part of it.

If you’re rolling your eyes right now, hear me out before you make up your mind. First off, before I go on, let me tell you that role-playing is not crazy. You don’t have to dress up in funny costumes. You don’t have to be especially geeky. You also don’t need to master a whole set of complicated rules about numbers (in most cases, anyway). All you have to do is be willing to think about what a character you created would do in a series of given situations, which is, of course, what writing fiction is all about. 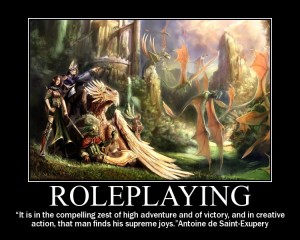 In my post about creating well-rounded characters, I highly recommended playing role-playing games of some sort to get to know your characters better. Even the simplest role-playing games, like getting together with other writer friends and asking each other questions as a character you created. This helps you work out the character’s speech patterns and think creatively on your feet, but you might also be asked questions to which you didn’t really think of the answers before, and the answers you make up on the spot might make you discover things you never suspected about your characters.

One of the things that have helped me most with my writing has been role-playing. Table-top role-playing games in particular are an invaluable resource for any storyteller. Be a player in one and you get to have your character react in all sorts of situations. There is no better way to get to truly know them; people’s characters are never so well revealed as through their actions in difficult situations, and it’s the game master (GM)’s job to put your characters in one stressful situation after another.

As a GM, I use role-playing as a way to test-drive certain complex stories. I get so much out of putting my players through my plots; a fun and nearly effortless “first draft”; an audience by whose reactions I can gauge which plot twists are successful and which are not; and a whole set of new ideas about where else my plot could go, other than the path I had planned for it; it also gives me an opportunity to find out which plots I’m really passionate about, and which ones I might get bored writing. If I literally can’t stop thinking about the game and I spend all the time between sessions waiting anxiously for the next one, I know I’ve got something that’ll hold me through the dreaded middle-of-the-book-blues.

Oh, and a final note. Before you think that it wouldn’t work for you because you don’t write fantasy, think again. I know Dungeons and Dragons is one of the most well-known of these games out there, but there are plenty of other games, and you can play any setting you like. Over the past few years, I have played some fantasy games, yes, but I’ve also done games set in the near future, post-apocalyptic settings, space operas, realistic WWII games, modern-day horror… just like any story, if you can think of it, you can play it. If you’re just starting out, I suggest a system like GURPS. Its mechanics are really simple, the game is built to make role-playing its main purpose, and the basic book is made so that you can create campaigns and characters for any setting you want.