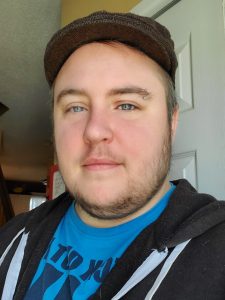 Nathan Caro Fréchette is a queer transgender sequential artist, publisher, and author. He has published over a dozen short stories, both graphic and prose, as well as five novels, three graphic novels, and two works of nonfiction. He has taught creative writing over a decade, and has a degree in Film Studies and another in Sequential Art. He was the founder and director of the French Canadian literary magazine Histoires à Boire Debout, an editor for the French Canadian graphic novel publisher Premières Lignes, and is a co-founder of the Ottawa-based publisher Renaissance. He has been teaching creative writing since 2005, and GMing various table-top RPGs since 1997.

If you would like me to review your book, please use the contact forms below to get in touch with me. Please note that I mostly review independent books and especially books by and about queer and other marginalized people.

I also welcome guest posts and interviews from published (including self-published) authors. If you want an interview, I will choose the questions; if you want to write a guest post (which I usually prefer over an interview) you are free to choose your topic, however, it must have something to do with your writing/creative process, being a marginalized writer, mental health, or queer things, and not just be a random promotional post about your book.

Some Assembly Required (ongoing on Tapas)

Alone, Nothing Without Us, Renaissance, 2019

Skin, Over the Rainbow: Fairy Tales from the Margin, Exile, 2018