As you may or may not know, I have started up graphic novels again! I have this one story which I’ve needed to tell for a long time, about mental illness and relationships, called Some Assembly Required.

This story has been with me for a very long time. It first came to be in a series of stories I wrote from age eleven until the middle of high school, about a bunch of characters having various adventures; it was your typical inspiration-of-the-week derivative teenage stuff, and in the middle of it all, two very minor characters kept falling in love with each other. I say “kept” because I didn’t really plan it, and I kept pulling them apart to go on to other stuff, but they kept finding ways to find each other again. It was the first time something happened truly organically, and I decided to keep only these two characters and their story out of all of this.

Through the years which followed, I rewrote their story, completely from scratch, over a dozen times, and eventually mental illness, which I was struggling with at the time, made its way into the narrative, right after I graduated from my sequential art degree, and I decided to write a graphic novel, in French, since I wrote mostly in that language up until that point, and since it is set in my hometown (or home city, as it were) of Montreal, with French Canadian characters.

Soon after, however, the collection in which I published the first issue of what was going to be a twelve-part serial ceased to exist before I could release the first chapter, so I put aside the graphic novel until I decided what to do with the story, then put aside sequential art entirely in favour of writing novels, because novels are far less time-consuming than graphic novels; for the same amount of content, I can put out ten novels in the time it takes me to finish one graphic novel (more on that later.) So I shelved the comic entirely, thinking I would never pick it back up, and wrote it out as a novel.

Pitching the book and sharing it with meta readers, however, I found myself picking up the first issue to show them the characters, the setting, the expression, and I thought even after all these years, there were so many thing I was truly proud of in this comic, and I started drawing it again.

Now, even though the novel exists in a finished, heavily edited, thoroughly rewritten form, I am seriously starting to draw the comic again. At the rate I am going, I calculate another eight years of work to complete it at the very earliest, and quite probably more like twelve years all in all, and I still don’t know whether or not I will release the complete book I have, but the comic book project is definitely back on.

Here are some pages for your enjoyment. 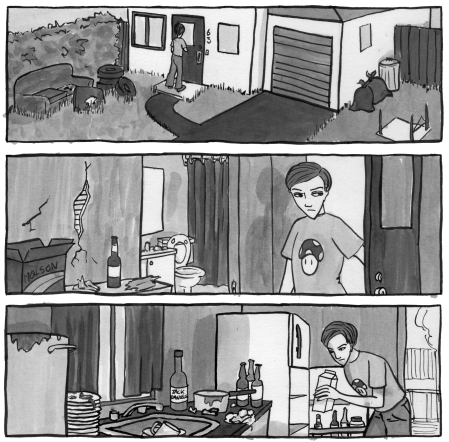 2 thoughts on “Some Assembly Required”