This post is a special request. To make a special request, please visit our Facebook page and post on the wall, or leave us a message. You can also send an email to icecreamforzombies@gmail.com .

I was asked to share my opinion on the MacGuffin (also known as McGuffin or maguffin), and what drives the plot. Personally, I’m very character-driven as an author, and I’ve nearly never used a MacGuffin in my work; I don’t have a very strong opinion about the device, but I know a lot of authors do. A MacGuffin is usually an object which drives the plot forward, but is generally inconsequential to the story, as it is seldom ever really used. The best examples of MacGuffins are Citizen Kane’s Rosebud, Pulp Fiction’s briefcase, and the Holy Grail in Monty Python and the Holy Grail; in the first and last example, the device is so interchangeable that it is not even found, though the whole movie is spent with the characters looking for it.

So is it wrong, or cheap to use a MacGuffin? The movies I mentioned earlier happen to have had great critical success, especially for their writing, and are now considered great classics; I think it goes to show that there is nothing wrong with using the MacGuffin as a plot device. The bottom line is (as is almost everything else in writing) it depends. MacGuffins are usually especially appropriate in thrillers and adventures; every Indiana Jones movie, for example, has a MacGuffin in it. It might even be appropriate in certain romance stories. After all, most stories are really about the personal growth of the characters, and how they triumph over adversity; not whether or not they get to use the widget they’ve been looking for (unless it’s terribly important to their growth), and if using a MacGuffin helps you tell that story, go for it.

Use caution, though. Dealing with a MacGuffin is like working with a radioactive substance; you have to wear your protective gear and handle with care. First of all, don’t overdo it. Having a MacGuffin is fine. Having two… well, radiation poisoning is cumulative. Too much of it, and it might kill your plot. And make sure the characters have a very good reason to want it. The only really good way to use a MacGuffin is to use it to show who your characters are and how they react to adversity; if you fail to give them a motivation, or motivate them in a way that is just not believable, your story will fall apart.

All that being said, the MacGuffin is not the only way to drive a plot forward. Having characters look for something desperately is all well and good, but there are two basic ways to make your characters do what you need them to: the carrot and the stick. The carrot is a great motivator, and a MacGuffin which is well done is a great carrot (though of course not all carrots are MacGuffins); after all, we can all relate to wanting something badly enough to get off our butts and do everything necessary to get it. Being character driven, however, I have a weakness for the stick, which, of course, consists of beating your character into making them do what your plot needs. The stick is a great way to apply stress and duress, and it’s under those circumstances that your character is truly revealed. Die Hard is a great example of the stick driving the plot. Great stories have a tendency to employ both alternately. Not everyone has a strong enough personality to withstand having the stick used on them exclusively; some will break. Not everyone has enough strength and self-discipline to get up and go get the carrot if it appears out of reach, either.

What it all comes down to is how well you know your characters. Not everyone wants the same carrot, and not everyone will react the same to the stick. Knowing when to dangle which carrot and when your character needs a good kick, and how strongly you need to apply either in any given circumstance is what makes their motivation and progress believable, and it’s what makes your story move forward smoothly. 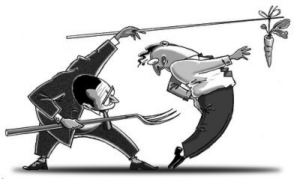