I was asked to talk about characters that are “flawless”, that are perfect and better than everyone else at everything that they do, even if they try it for the very first time. Characters that are loved universally by everyone else in the story, that make friends with all sorts of different people without trying, and that become the object of desire of every single person of the opposite sex by simply existing.

I hadn’t addressed those characters in my original post on creating characters, because I honestly assumed  it simply didn’t happen, that no one wrote these characters, that everyone knew better. Of course, assuming the other party knows something is one of the biggest landmines of efficient communication.

So here it is. Put simply, your characters should have flaws. Real flaws. Not just tiny little ticks that are just more excuses to make the other characters find him or her cute.

So why should my characters be flawed? I want people to admire them!!

It’s normal to want people to love your characters. However, if you think that making them perfect is the best way to go about this, you’re dead wrong. People tend to fall in love with people whom they can understand. If people are going to get attached to your characters, they need to be able to relate to them, and believe they could actually be real people.

When your characters are too perfect, not only are you failing at creating the impression of a real person through your characters, but you are also touching a nerve that the vast majority of people have, an instinctive sense that most people have when someone is obviously lying to them. A lot of the time, your readers won’t be able to put their finger exactly on why such and such a character is bothering them, but they will know that the character is unrealistic, unbelievable, or insipid. They will feel instinctively that such a character simply cannot exist. And they would, of course be right.

Think about it. How many people do you know that are truly perfect? That are good-looking, intelligent, and good at every single thing they do? Not just good at it, but better than anyone else?  At everything? That have every single person around them fall in love with them? These people simply don’t exist. It’s a paradox; people that know better than everyone else are know-it-alls, and annoy most people around them. People that are better at everything than everyone else are show-offs. See where I’m going with this? In her blog, Marianne Elliott put it best: 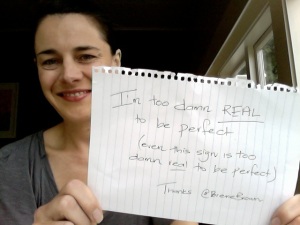 All that doesn’t mean, of course, that your characters can’t be larger than life. But there is a world of difference between someone who is larger than life and someone who has no flaws. Flaws are, in fact, a necessary part of creating characters that are larger than life. What makes a character larger than life, what makes them admirable, is that they are able to overcome their flaws in order to triumph. If they don’t have those flaws to begin with, then they have nothing to overcome. If everything comes easy to them, then they will have no difficulties in the story; without difficulties, there is no conflict, no suspense, and the outcome of the climax is painfully obvious. The flaws you should give your character should be exactly those that become obstacles that prevent them from reaching their goal. Only in overcoming them can they bring the story to its natural conclusion.

Everyone has flaws. It’s in being able to move past them, to rise above them that we truly become someone to admire. Don’t deny your characters the opportunity to become great.

When I was originally asked to write about this, I was asked to give my opinion on the Mary Sue trope. I don’t want to get into this too deeply; to me, it means exactly what it originally did, which is a character (male or female) that is was too perfect in exactly the way that I described in the first paragraph of this post. Since it was coined after a character from a Star Trek fanfiction, however, the term has been misused to start describing any strong female character (believe it or not, according to some people, strong female characters are somehow not believable). You can find out more in this excellent blog post which describes the term’s original meaning and its evolution.

One thought on “Nobody’s perfect”